The owner of a 1951 Jaguar XK120 roadster, which he bought aged 19 in 1969, is selling his lifelong love at the Charterhouse auction on Sunday 11th February.

The Charterhouse auction takes place at the Footman James Great Western Classic Car Show across the weekend of  February, 10-11 at the Royal Bath and West Showground, BA4 6QN.

“The Jaguar XK120 roadster has always been a sought after car, but what a car it must have been to own as an architecture student in 1969”, commented Matthew Whitney, head of the Charterhouse classic car department. “Rarely do you come across cars which have had nearly 50 years of continuous ownership. Personally, I have owned about 80 cars in my life so for one person to keep a car for so long is a rare find!” 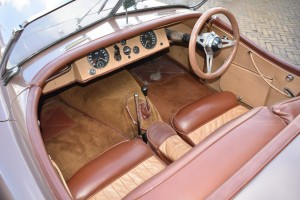 The owner paid just £180 for the car, which had had only four previous owners, in 1969. Over the following decades, the Jaguar enjoyed taking part in hill climbing events, and was both cherished and well looked after.

In 2010 the XK120 began a two-year restoration. It was stripped down and the body was taken off the chassis by professional restorers. The original 3.4 litre engine block was bored out to 3.8 litre, and new larger 2-inch twin SU carburettors were fitted along with a Salisbury rear axle and disc brakes all round. 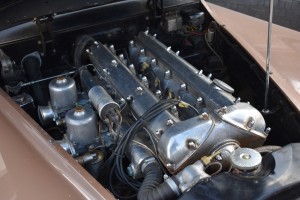 At the same time, it was decided to repaint the car in its original colour combination of metallic bronze with a two tone tan leather interior. Keeping the car as original as possible – it comes with a Heritage motoring certificate and has correct matching numbers – the only concession the owner insisted on making was a smaller steering wheel and for the driver’s seat to be taken off its rails and fixed further back into the cockpit. Standing some 6’ 7” tall, it was the only way he could drive the car comfortably and the original seat rails are included with the car.

After the restoration was finished, the owner continued to use the car rather than keeping it under a dust sheet in his garage, putting another 25,000 miles on the clock.

However, as the owner will shortly be approaching 70 years old, he has decided now is the time to let a new owner take custody of the XK120, as he does not find it the easiest of cars to get in and out of. Not that he will be giving up driving, as he is planning to replace his trusty Jaguar with another Jaguar – this time a new F Type, which he hopes to keep for another 50 years!

Kicking off the show season every year, The Footman James Great Western Classic Car Show is the biggest and best of its kind in the South West of England.

Attracting thousands of classic vehicle enthusiasts on their journey to restoration completion, the halls of the Royal Bath & West Showground are filled to the rafters with specialist traders, parts suppliers and jumble stands offering missing pieces of restoration and maintenance puzzles at bargain prices.

For further information regarding these auctions, or to arrange a home visit if you are looking to sell a classic car or a classic motorcycle, contact Matthew Whitney at Charterhouse, The Long Street Salerooms, Sherborne 01935 812277 or email images for valuation at info@charterhouse-auction.com

To purchase a discounted advance ticket for the show which costs just £8, please click here.

Do you own a classic car? Come along to the show and get half-price gate entry costing only a fiver!